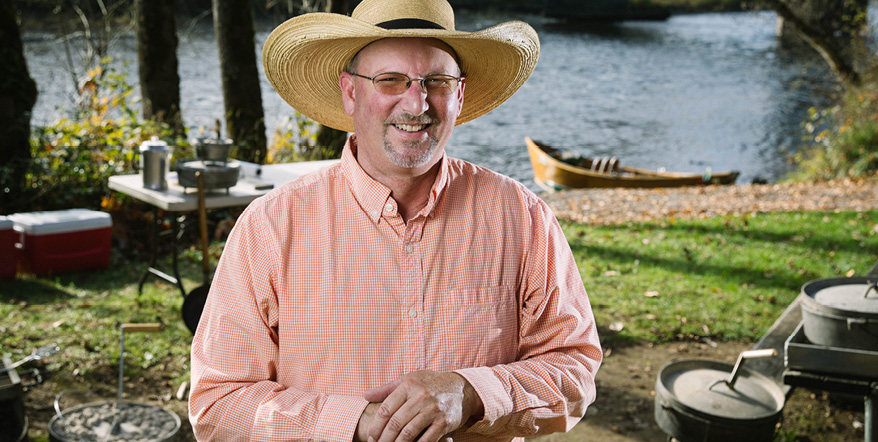 Uncommon Oregonians: The Duke of Dutch Ovens and Fishing Trips

When Billy Pruitt was growing up in Grants Pass, he knew he wanted to go into the family business. After all, everybody loves to go fishing. And with his dad and uncle running folks down the Rogue and McKenzie Rivers throughout much of the last century, he had some great footsteps to follow.

“My uncle started guiding in the 1920s out of a drift boat,” Billy shared. “My dad, Billy Pruitt Sr. did it, too. Dad was also a great adventurer, skier, and mountain climber. He even got invited to climb Everest twice – long before all of today’s safety equipment and gear.”

Adventure must run in the family, because Billy has lived quite the life in just 55 years. At the age of 11, he was the youngest person to cross-country ski around Crater Lake. He did it again the next year.

“My dad and I were the last group to run the upper Rouge River before they put in the dam. Now it’s under water,” Billy recalled while unloading a giant, cast aluminum Dutch Oven.

One of his prized possessions, the ultra-rare 19” Dutch Oven is so large it can cook 55 biscuits at one time. It’s a real showstopper at Dutch Oven competitions, and one of the reasons he’s become a household name among enthusiasts--he’s an award-winning cook!

“My dad and cousin were some of the first to bring Dutch Ovens on guided fishing trips. I’m thinking about starting up some cooking classes soon.”

Those classes are just the beginning of what Billy is cooking up. Every year, he helps feed 2- to 3-thousand horseback riders during a 10-day ride, builds bird houses from recycled materials for the Christmas season, sports the title “handyman” for dozens of homeowners along the McKenzie River, and proudly shuttles fans to Autzen stadium for Duck football home games.

Today, Billy has been running people down the river for over forty years, helping them catch their limit, and enjoy his world-famous cooking.

“I’ve gone on thousands of fishing trips over the years,” he said with a smile. “Fly fishing is like golf. They both take time, practice, and a bit of money.”

Billy considers himself a positive people person, and with his infectious smile and positive attitude, it’s hard to disagree. That’s why he loves Northwest Community Credit Union.

“I first opened my account when a guide buddy mentioned the credit union over lunch. I’ve been a member ever since.”

While we have been able to help Billy finance his Suburban work rig and a 32-foot Class C recreational vehicle, he’s gotten the most out of his Northwest Visa® Rewards Card.

“I use that card for everything. Then I use the rewards to get gas certificates. It’s a great deal.”

At Northwest Community Credit Union, we enjoy partnering with guys like the world-famous Billy Pruitt. Like us, Billy is passionate about people. So, whether he’s using his Northwest Visa® Rewards Card to buy tackle for an upcoming trip or gas to feed his Suburban, we’re proud to reward those much-needed purchases and keep his lifelong adventure going strong.