In 1974, Rocky Trotter found himself flying in and out of Vietnam. There was a war going on, but by the time his service to the Air Force ended, he was back in the states and looking for a job in Oregon.

“I went to work in a sawmill,” Rocky remembered. “That’s when I heard about the credit union.”

Rocky opened a savings account and got a car loan. “I bought a used 1971 Oldsmobile. Wish I still had that thing sometimes,” he said with a soft chuckle.

Since that day, Rocky has been an avid member.

“The people at Northwest Community are friendly. If you need a loan or answers, they’re always there to help.”

Rocky is an avid member of his local Veterans of Foreign Wars (VFW) organization and an Honor Flight guardian, too.

The Honor Flight Network transports heroes to see our nation’s memorials throughout the year. This includes veterans of World War II, the Korean War, and Vietnam.

“Honor Flight is a non-profit organization that takes veterans to Washington, D.C. to visit the memorials that were built in their honor, and see how America remembers the service of its vets,” Rocky explained with pride. “I do it twice a year in May and October. I go because I care about our aging vets. I push their wheelchairs, help them in and out of the plane, and make sure they have a good time.” 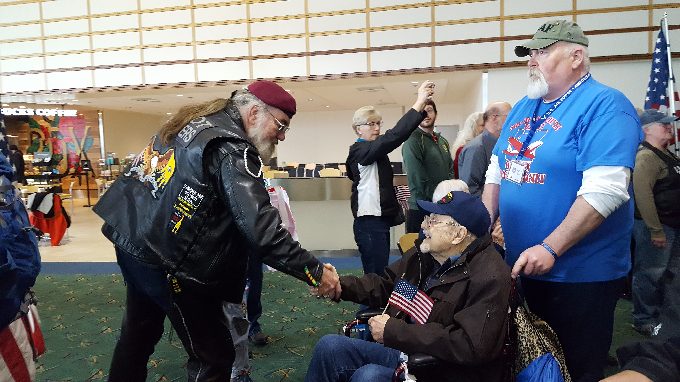 Those who fought for our freedom are not expected to pay anything for the trip. Instead, selfless Americans like Rocky help raise money through their local VFW, Elks Lodge dinners, corporate donations, and other fundraising.

Here’s the really impressive part: Rocky uses his own money to fund his tickets to and from D.C. “I use my Northwest Visa® Rewards Card to pay my part,” Rocky explained. “As a guardian, I’m there to take care of our aging heroes.”

Each group of Honor Flights can often fill a 737 with staff, team leaders, guardians, and the veterans themselves. Most trips to D.C. end at Arlington and the tomb of the unknown soldier.

“Anytime we see someone who is about the right age out in public wearing a military hat, we thank them for their service and then ask if they have ever been back to D.C.,” Rocky said. “If they’re interested, we get them on the list.”

At Northwest Community Credit Union, we’re honored to have heroes like Rocky on our list of members. Whether he’s transferring funds in Online Banking, paying bills with Bill Pay, or buying plane tickets to Washington D.C. with his Northwest Visa® Rewards Card, we’re proud to make it as easy as possible for this amazing, humble, and noble man to help others and himself.