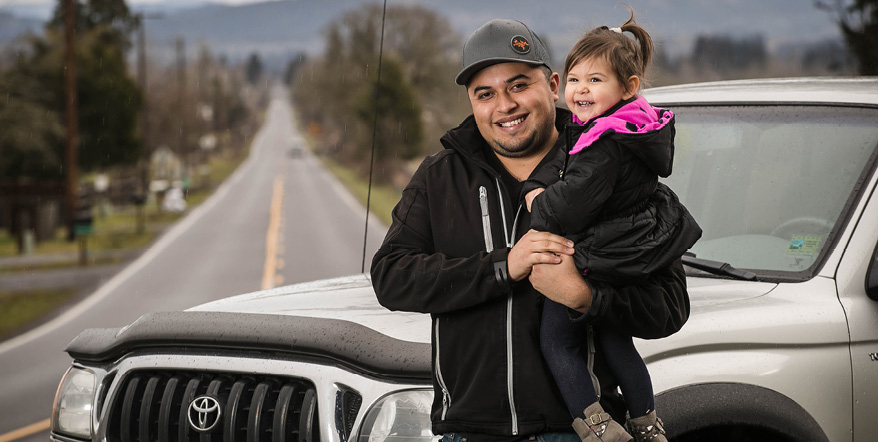 Uncommon Oregonians: The Man with a Plan

When Juan Jimenez was a toddler, his dad would work for months at a time away from home, eventually finding steady work in Oregon. He fell in love with the region and moved his wife and kids to the Willamette Valley.

Juan was just four when he and his siblings arrived in the U.S. Like most kids, he studied hard, made friends, and planned ahead for the future. But unlike a lot of kids, he also became bilingual – a skill that he utilizes on a daily basis.

With his bilingual background, involvement in the local Latino community, and his energetic personality, he was hired on at a local dealership right out of high school. A few dealerships later, he got hired at Kendall in the parts department. “My dad has always loved cars,” Juan said thinking back to his childhood. “When I was growing up, he’d take me to the dealership every time he’d buy something new. I think that’s why I wanted to work at a dealership. I do a little bit of everything at Kendall, especially because I can speak Spanish,” Juan commented.

Three years ago, Juan met his future wife at work. A short time later they were married and welcomed a baby girl into the world. And while he once spent most of his disposable income fixing up and tricking out cars, his priorities quickly changed after becoming a dad. Today, he’s saving for his daughter’s future and making moves toward his next career.

“My dream job is to be a sheriff,” Juan said with an easy smile. “Not that I don’t love what I’m doing now, but there’s a volunteer program with the Lane County Sheriff Department that I’d like to try.”

That willingness to try something new is what brought Juan to Northwest Community Credit Union.

“I randomly walked in to Northwest Community and immediately liked it,” he recalled. “I never feel rushed, and they really care. When we told them we wanted to keep our daughter out of daycare, the Northwest Community people showed us how we could make it happen. My wife is a stay-at-home mom, and it’s wonderful.”

Today, the Jimenez family uses Northwest Community Credit Union for all of their financial needs, including a Northwest Visa® Rewards® Card.

“Usually we use our rewards points for gift cards for the holidays. But this time we’re saving those points to go to a theme park.”

At Northwest Community Credit Union, we know that uncommon is different for everyone. Whether he’s financing a dependable vehicle for his family, using eBanking on his smartphone, planning ahead for a career in law enforcement, or working with members of the Latino community, we’re proud to be part of Juan’s plan and help him reach his ideal financial future.